When David (not his real name) graduates from medical school in 2017, he will have borrowed $160,000 to fund his education. It’s a debt load seen among more and more of his cohorts as medical school tuition continues to rise across the country.

Like all members of the Canadian Medical Association, David has access to objective advice from the CMA subsidiary MD Financial Management—regardless of his net worth. 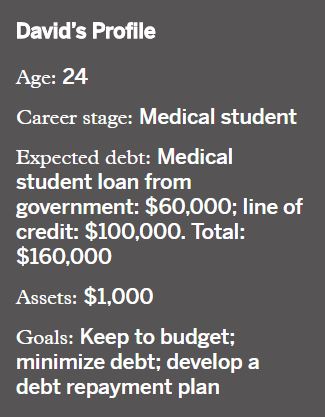 “My biggest concern is how I’m going to pay off this debt when there are other priorities at the same time,” says David, who is 24. Following medical school, he plans to do a residency in family medicine, and also get married to his long-time girlfriend. “I know that it will all work out, but I just don’t know how long it will take.”Having a financial plan has alleviated his worries. Like all members of the Canadian Medical Association, David has access to objective advice from the CMA subsidiary MD Financial Management—regardless of his net worth.

“I always hear about these people who have their accountants and bankers, and they’re getting all this advice and information,” says David. “I never had that. So I saw MD as a great way to get that information, because I can’t teach myself everything.”

Modest Background Drives His Desire to Save

In their initial meeting, David and his MD Advisor talked about his short- and long-term goals as well as his financial “personality.”

According to his Advisor—we’ll call her Michelle—David is remarkably engaged and eager to learn about personal finance. “We see many medical students who are in the same situation—heavy debt load, competing priorities and so on,” she says. “But David wants to learn and understand the details. He enjoys having a solid plan in place for that peace of mind.”

Growing up, David witnessed how hard his parents worked and how carefully they saved for the future. “My mom and dad were farmers in South America before they immigrated to Canada,” he says. “My dad had a factory job, and he worked all these overtime hours and extra shifts just so he could give me and my brother the opportunities that they didn’t have.”

This probably explains why David is a fairly conservative spender. He has budgeted $53,000 a year for his time in medical school. Half of that is for tuition and the other half is for living expenses (roughly $2,200 a month). In the first year, he exceeded his budget by about $5,000.

When he met with his MD Advisor, they looked at the categories where he had overspent. “We agreed to cut back 30% here, 20% there,” David says. “We kept it realistic—and so far, in my second year I think I’m doing a better job staying on budget.”

Part of the annual review with his Advisor also involves examining his net worth and how it’s trending. At this point, it’s hard to say how long it will take David to pay off his $160,000 debt (assuming it doesn’t get larger). But the goal is to ensure that his negative net worth turns positive.

“While David is just starting to earn an income, we want to be sure we have a debt repayment strategy as well as an investing plan in place,” Michelle says.

Early Lessons in Investing Help Prepare for the Long Term
For now, David is happy that he has any money at all to invest: he received $1,000 from an uncle for getting into medical school, and he decided to try to grow it instead of splurging on something.

Before exploring investment options, David’s Advisor helped him identify his investment objectives and risk tolerance. They looked at his attitudes about investing and risk in general, and decided on a balanced growth portfolio (approximately 25% fixed income, 75% equities) as the most suitable.

“With this portfolio, David will experience some market volatility,” Michelle says. “But when a young investor like him becomes more educated and comfortable with market cycles, they learn to not panic during downturns and to trust in their long-term plan. That’s one reason it’s so important to start investing early, as David is doing.”

Besides investing, David is eager to learn about the different financial issues he will encounter in residency, during his transition to practice, and when he is a fully licensed physician—in particular, how incorporating can help minimize taxes.

“I think there’s a great opportunity to achieve all my financial goals,” David says. “I’m just glad to have the right guidance and the right knowledge base to go about doing it in a smart way.”