Mateo and Naomi first crossed paths in med school while waiting for a microscope in their university’s anatomy lab. What quickly came into focus was the start of a lasting relationship. They completed medical training as a couple, pooling financial resources to make ends meet. Now 34, Mateo has worked as a general surgeon for two years and wants to incorporate his practice. Naomi, 33, just finished working her first year in family medicine in a group practice.

The challenge: “How can we get out of debt so we can start a family?”

Despite the significantly higher income in practice, money still feels ridiculously tight. The couple expected to have made a bigger dent in their student loans and debt by now, living frugally by their, admittedly, middle-class standards.

“It’s frustrating because, on paper, it seems like we’re bringing home a lot of money,” says Naomi.

“We’ve been focused on paying our debts as fast as possible, but for some reason, the balance doesn’t look like it has shifted at all. We want to have children soon, which means we will also need to fund parental leave and then maybe daycare or nanny costs later on.” 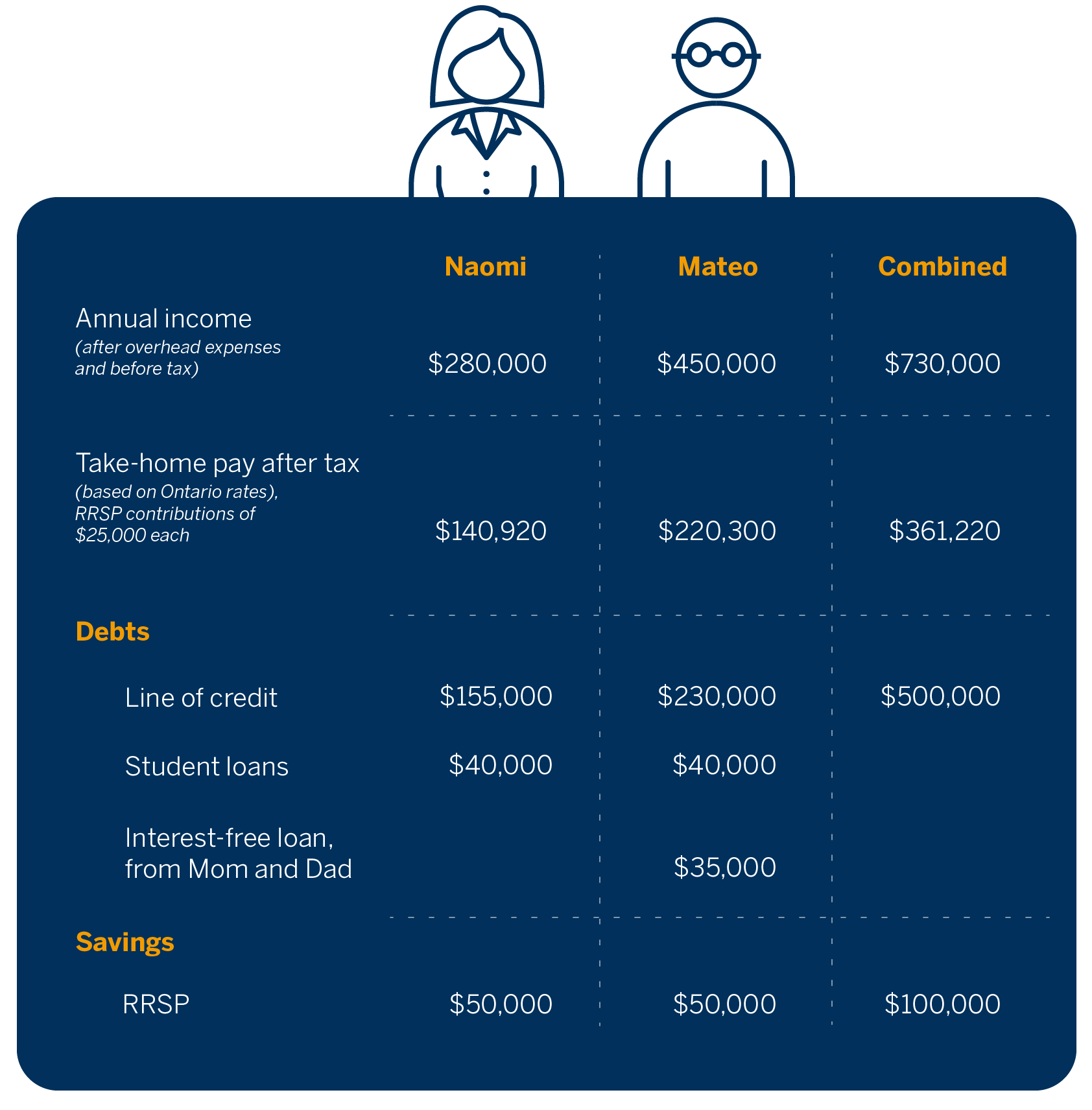 Naomi was feeling discouraged when she first approached her new MD Advisor*, Alison. The couple had met with their personal accountants several times over the past few years for help, but it seemed like nothing ever made a difference.

Mateo and Naomi were determined to pay off their combined lines of credit of $385,000 within five years of starting practice.

The extent of their plan was to “pay off as much as possible.” This meant making payments on five or six debt accounts every month, plus clearing the full balance on their credit cards. Their line of credit repayments alone totalled close to $7,000 per month based on a five-year amortization schedule, including monthly interest of more than $1,000 in the first year. They had also been chipping away regularly at government student loans, even though these loans are now interest-free until March 2023.1

A circular tax trap, revealed. A closer look at the situation revealed that the couple hadn’t been planning for their tax instalment payments, which amounted to $75,444 every three months. Whenever these came due, they’d dip back into their lines of credit to pay taxes owed. One of the first things Alison recommended was to include their tax instalments in their overall financial plan, so they would be ready for them.

Precarious cash flow. To bring the numbers to life, Alison and her team at MD completed a cash flow projection for a clearer picture of what was happening with their money. “I showed them that they were robbing Peter to pay Paul, using their line of credit,” says Alison. “That’s why they weren’t making any progress, and it was such a heavy weight on them.” Their frustration was so overwhelming, it often steered spending off track, with impulse buys such as last-minute vacations for stress relief.

Premature incorporation. Mateo was seriously considering incorporating his practice at his accountant’s suggestion. Yet after expenses, there would hardly be any money left inside the corporation. The cost and burden of accounting and legal requirements would actually outweigh any tax-planning benefits right now. At MD, we often advise new physicians on when it makes sense to incorporate a medical practice. Incorporating too early can work against your goals when you have a lot of household debt, like Mateo and Naomi do. Alison and her team projected how Mateo will, in time, be able to use a corporation as an excellent financial planning and retirement savings vehicle, but there’s no rush to set it up right now.

Pay off one debt at a time. The first piece of advice was to bring order to the couple’s chaotic approach to repaying debt. “I was able to present a plan to attack the debt with their same existing cash flow. It would see them paying off certain debts first, and would then allow that monthly cash to go toward the next chosen target,” says Alison. Naomi and Mateo agreed to prioritize their tax instalment payments, then their line of credit debt. If they hadn’t already paid off their credit card debt, that would have been the first priority, given the significantly higher interest rates on that kind of debt.

Manage cash flow to include taxes. Once Naomi and Mateo prioritized how much to set aside for quarterly tax instalment payments, those instalments weren’t a surprise every few months. Alison says, “We created a cash flow strategy that included putting money aside each month for taxes, making automated payments to the line of credit (that will soon become a term loan with their bank, which is typical a few years after residency) and earmarking money for their personal expenses and vacations.”

Set milestones to feel good about progress. Many strategies can be used to control debt, such as paying highest-interest loans first or focusing on the largest debt. The key for Mateo and Naomi was to make a plan they could follow — and then feel positive about making progress.

With patience and a plan, you’ll get there

With a plan in place, Mateo and Naomi have a clear picture of what is happening with their money, and a road map for repaying their loans early in their medical careers. As their plan progresses, they’ll be able to focus in on other goals. “In the planning process, we adjust to clients’ changing goals,” Alison says, “like buying a house and taking time off for parental leave in the case of Mateo and Naomi.”

Two-physician households like theirs are financially different from those of other professional couples, since they are often burdened by hundreds of thousands of dollars of training-related debt.

“We’re not magicians. We can’t just make the debt go away,” Alison says. “But we can lay out a realistic plan that shows them how to achieve their goals and be ready to move on to the next stage in life.”

Your MD Advisor can provide clear guidance when it’s needed the most, with expertise and strategies serving the unique financial concerns of Canadian physicians and their families.