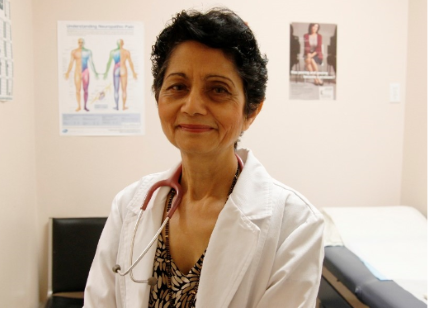 “Today I was in her office as usual her patients came
from miles around
And as usual a pen in one hand a paper in the other
her gait as ever sound
Looking at the wall a beautiful arranged notice of
recognition she had received
Given to her Nov 2001 Saskatchewan Order of Merit
is not difficult to conceive
She’s not only a doctor she’s also a counselor lecturer
mother and nurturer”
- Florence S. McLeod

It’s not often a patient writes a poem about their doctor. And yet, it’s not often that a doctor leaves such a huge impact on not only her patients, but also her community, province and country.

Dr. Lalita Malhotra has practised obstetrics, gynaecology and family medicine in Prince Albert, Sask. since 1975 — the year she moved to Canada with her husband, Dr. Tilak Raj, a pediatrician. She has dedicated her career to women’s wellness, especially among the Indigenous communities of the area.

Her vast contributions to the health and wellness of her community are remarkable and have not gone unrecognized. In 2001, Dr. Malhotra was invested into the Saskatchewan Order of Merit, followed by the Order of Canada in 2006. She also later served on the Order of Canada advisory council. In 2008, she was deemed Citizen of the Year in Prince Albert, and in 2010 she was named one of 35 top “amazing Canadian women” by Canadian Living magazine.

But perhaps no fact better underlines her character and significance than this one: of the 10,000 babies she has delivered over the decades, a dozen of them bear her name, Lalita.

Arriving in Canada was challenging at first, leaving her residency in England and landing in Saskatchewan without a place to practise, while struggling to find acceptance in the male-dominated medical community.

In doing so, she became the first independent female physician in Prince Albert to have her own practice. To her surprise, there were 12 patients at her doorstep on opening day — and the number grew exponentially from there. Soon, she was delivering over 350 babies a year.

In her clinic, Dr. Malhotra grew inspired by the girls and women she cared for — and who she realized needed far more resources and support when it came to their reproductive knowledge and health. She took the bold step of approaching the provincial government for funding to supply her patients with contraceptives at either low or no cost. She also offered evening appointments to her younger patients, to ensure they could see her without fear of missing school.

In 1992, she established the Women’s Wellness Centre, developing a deep rapport with her patients and offering a safe space for many to seek advice without fear and free of judgment.

She also recognized that there was a gap in women's health care at the other end of the spectrum so, in the following decade, she opened a menopause clinic to offer counselling to women dealing with feelings of disassociation and loneliness.

Since day one, Dr. Malhotra feels she was able to connect closely with Indigenous women, who have been a part of her life in Prince Albert and whose health and wellness are often dependent on their personal stories.

“Women’s issues can run deep and the only way to connect is to look into their eyes, hold their hands, and extract the information you need,” she says. “They need to have trust and confidence in you in order to pour out what is there. That may include sexual abuse from childhood, physical and emotional abuse linked to poverty, or a lack of education and opportunities. I wanted to help break these cycles and help them stand up.”

Now 82, Dr. Malhotra is seeing the third generation of Indigenous women from the same families and continues to be a dedicated advocate for their health and well-being. She is proud to watch more and more Indigenous women “come out of their cocoons,” return to school, and become pillars of their households.

“If a woman is educated, the next generation will be inspired to be educated as well,” she says. “I’ve seen girls who I’ve delivered become nurses, lawyers, judges, doing so well. My legacy is how they’ll pass these achievements onto their children.”

For the deep connections Dr. Malhotra has sewn and the unwavering support she has provided to their community, Indigenous elders have bestowed upon her a “star blanket,” considered a high form of honour, and awarded her the title “Angel of the North.”

Two years after her husband passed away, Dr. Malhotra seized a new opportunity to make a lasting impact on her community, this time through philanthropy.

The Malhotras had both witnessed the plight of parents forced to fly their babies to larger centres — sometimes out of province — to receive specialized pediatric care. To change this, she made an $800,000 contribution to the Victoria Hospital Foundation to build a neonatal intensive care unit (NICU) in Prince Albert.

“I still remember on one of our wedding anniversaries, my husband had to fly four babies to Edmonton, and I thought — if we had our own NICU, we wouldn’t have to separate these babies from their parents,” says Dr. Malhotra. “It was a meaningful legacy for my husband. We are born with nothing, and we go with nothing. So we may as well use the money we have for a good cause.”

The state-of-the-art Malhotra NICU at the Victoria Hospital is scheduled to open this spring.

Dr. Malhotra lives in the same house she and her husband bought five decades ago. It was there they raised their three children, two daughters and a son, for whom they tried to keep every door open and inspire to test limits. Following in their parents’ footsteps, all three became physicians, and one daughter became a medical director at the B.C. First Nations Health Authority.

Dr. Malhotra has announced she is retiring from practice this summer — but her contributions to the people and the community are far from over.

In fact, she is working on a new project with the Premier of Saskatchewan: a school where Indigenous boys can learn vocational skills and gain employment in industries that need skilled workers. She anticipates that the school will be completed within the next five years.

“I can’t retire and sit without doing anything,” she says.

We have no doubt Dr. Malhotra will continue to make an impact on her community as she enters this next phase of her life. Congratulations on her well-earned retirement!