Net income among physicians varies widely. Figures in this article are based on data from the Canadian Institute for Health Information (October 2021), and represent average gross clinical income before overhead, taxes and other expenses.

There are more than 10,900 surgeons working in Canada today, earning an average gross annual income of $573,586.

But surgeons’ income varies widely, depending on the surgical specialty and province of practice. 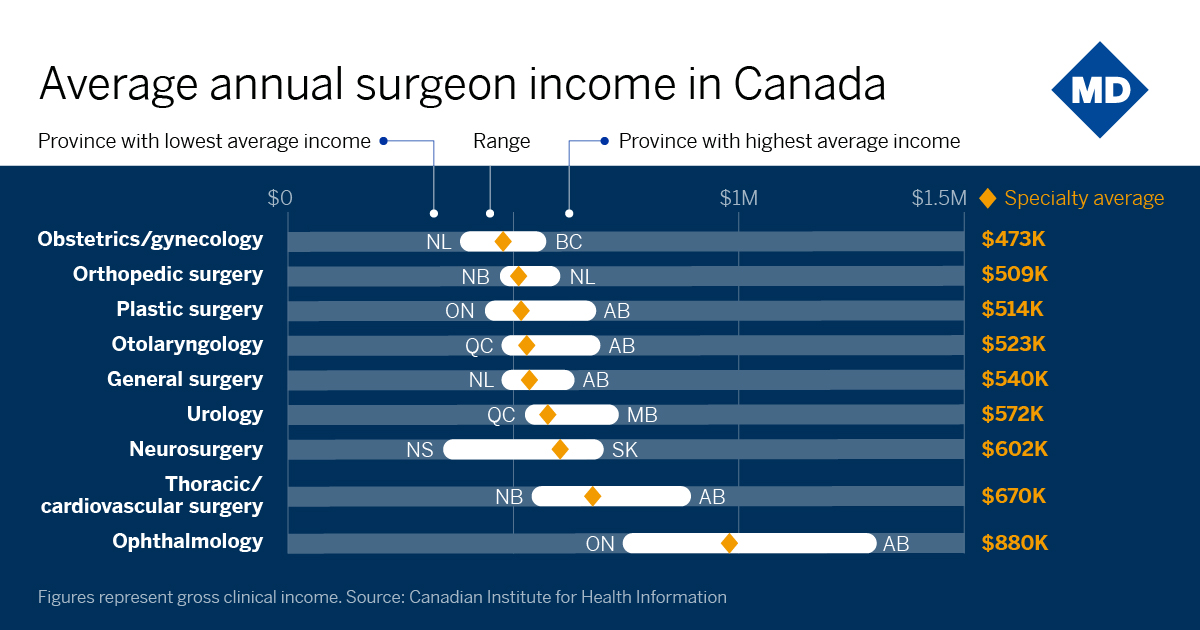 Take me to the tables

How much do surgery residents make?

The short answer is that surgery residents don’t make any more or less than residents in other specialties. In Canada, residents are paid a salary and their pay depends on 1) their postgraduate year; and 2) the province they’re working in — regardless of which medical specialty or surgical specialty they’re in.

See How much does a medical resident make? for the salaries of resident physicians by province, from the first to the last year of training. The gross salary is what a resident receives before they pay any tax, employment insurance, and Canada Pension Plan/Quebec Pension Plan premiums.

What is “gross income”?

Most surgeons are not paid a salary by an employer1 — they are paid using a fee-for-service model. Their gross income (or gross clinical payment) is the amount that they bill the government, not what they take home. Self-employed physicians still need to pay their overhead expenses, such as rent, staff salaries, equipment and insurance; and their income tax.

Note that the average gross incomes in this article are for a “full-time equivalent” physician; the earnings of part-time physicians were counted in, on a pro rata basis.

The figures in the following tables are from the Canadian Institute for Health Information (CIHI), published in October 2021 and based on 2019–2020 data.2 CIHI provides information for nine surgical specialties, by province.

Yukon, Northwest Territories and Nunavut were not included in the tables because there were not enough data. An asterisk indicates that data were suppressed to protect confidentiality where there were four or fewer physicians in the province; n/a indicates not applicable and/or that there were no physicians for this specialty in the particular province.

Gross annual income across all surgical specialties by province

1 Note that incorporated physicians can choose to have their medical professional corporation pay them a salary.

The above information should not be construed as offering specific financial, investment, foreign or domestic taxation, legal, accounting or similar professional advice, nor is it intended to replace the advice of independent tax, accounting or legal professionals.