Arriving at the beginning of 2020 feels like an important milestone, we ended another year, but have also entered a new decade. As an investment manager, I'm always looking forward to best position our portfolios, but as we say goodbye to the 2010s, I think it's important to remind ourselves what an exceptional decade it was.

We saw better than expected returns with lower risk

Ten years ago, we built portfolios based on our forward-looking capital market assumptions. For a portfolio with a 10+ year time horizon and a growth and modest stability focus, we expected an approximate return of 5.8% with an expected risk (as measured by volatility) of 8.8%.

Ten years later, this portfolio actually returned 6.9%. Admittedly, it was nice to see returns ahead of our analysis. More interesting was that risk was much lower than expected. It was truly incredible to see this portfolio with risk of only 5.4%.

This narrative was apparent throughout our portfolios over the past decade.

At the time when we were constructing the aforementioned portfolios, we believed both U.S. and international equities would outperform Canadian equities, and that overall equity returns would range from 5.6% to 7.5%.

Fast forward, we saw the S&P/TSX Composite Index deliver a solid 6.9%, the S&P 500 Index produce a whopping 15.9%, and international markets (as represented by the MSCI EAFE Index) harvest 8.3% — all exceptional returns.

This isn't the first time the U.S. equity market has been the outlier. The 1980's and 1990's for example yielded even stronger results. Looking at the 2010s, the collapse of the information technology sector followed by the global financial crisis, looks to have produced the real outlier.

Here in Canada, the past decade has been remarkably stable, considering the volatile nature of equity investments.

At the beginning of 2009, there was a lot to be concerned about. The global financial crisis was fresh in our mind and most investment portfolios had seen declines.

As a result, we saw major financial reform and stricter regulation on global banks, making them safer investments than ever before. We also saw U.S. policy makers employ quantitative easing (purchasing trillions of dollars of U.S. bonds to lower interest rates) to keep markets afloat.

It did more than that. "Cheap" money fueled corporate borrowing to execute share buybacks, which in turn drove up earnings per share and powered the rally. 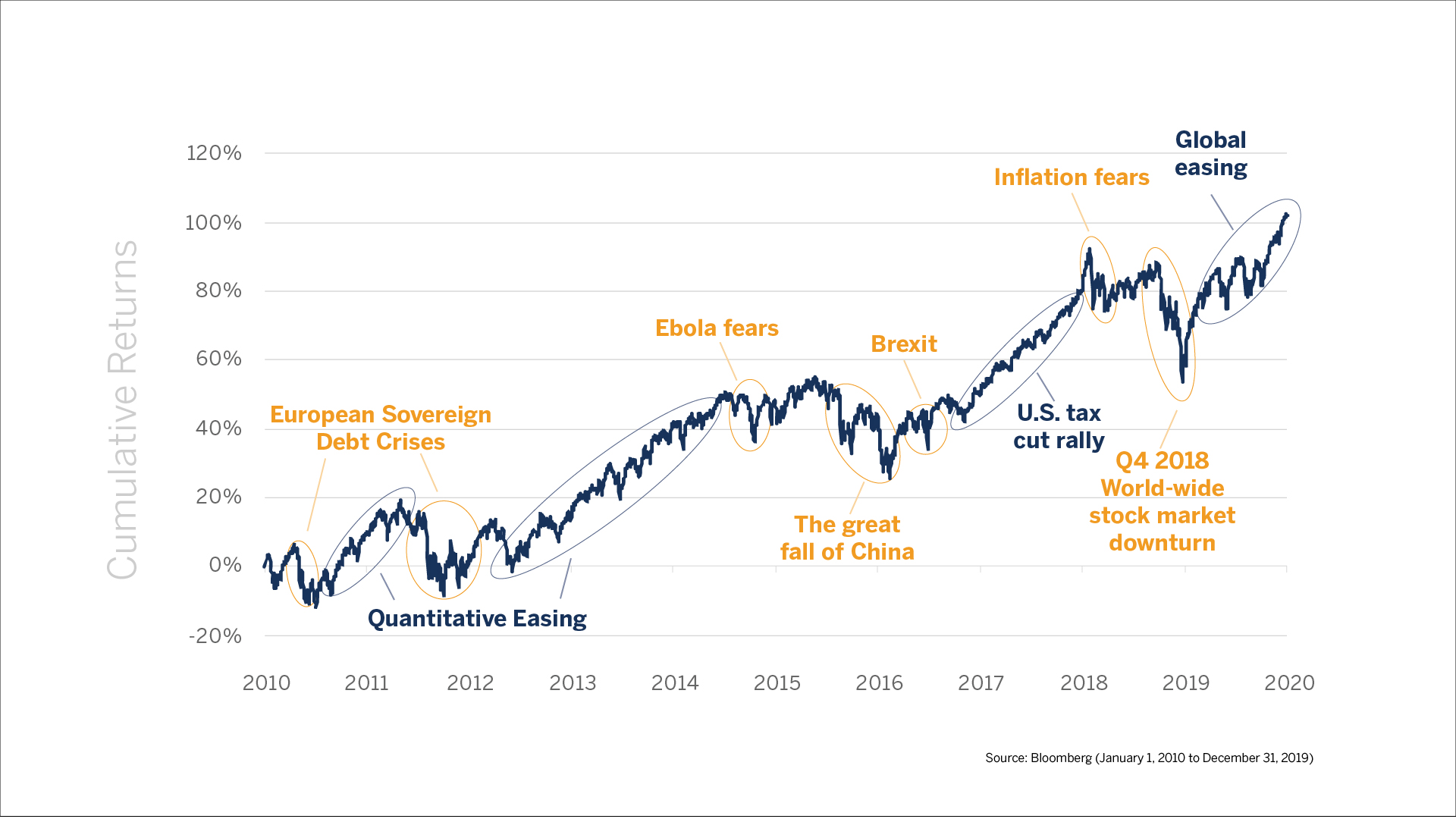 Against the backdrop of safer banks and easy money, technology stocks were reinvigorated. In the U.S., just a handful of stocks drove the majority of the exceptional performance. The FAANG stocks (Facebook, Apple, Amazon, Netflix and Google) delivered robust growth and even stronger growth expectations to propel the technology and consumer discretionary sectors to all-time highs. Note that Apple became the first company to have a market capitalization of US$1 trillion during this time.

We saw the rise of China take its toll on international trade and spark a trade war as the U.S. tries to maintain its number one spot in the global economy. This was no surprise as GDP growth in China has been explosive over the past decade, approximately tripling to US$15 trillion.  It's now only a matter of time when the Chinese economy surpasses the U.S. economy (GDP of approximately US$22 trillion) as the gap continues to narrow.

Globalism came under pressure as populism rose in the decade. Major elections in Europe, the U.S. and the U.K. have been decided based on populist ideals, focused significantly on anti-immigration. This divide in political ideals ultimately resulted in additional uncertainty and volatility during key events like President Trump's election and Brexit.

Despite the many ups and downs along the way, the MSCI World Index doubled over the last decade.

2019 certainly did its part, significantly contributing to the decade's performance. It was certainly a great year and will go down in history as one of the best. Performance was well above long-term averages and top quartile for both Canadian and U.S. equities—capping off a great decade in investment performance.

Historically speaking, economic expansion in the U.S. appears long in the tooth. In fact, the 2010s was the first decade since the 1850s without an economic recession. The current recovery run of 127 months is now the second longest expansion, exceeding the 120-month run from the 1990s.

With that, we now see headlines of impending recession and with the S&P 500 Index at all-time highs, there are also concerns about lofty valuations. While indicators we observe indicate that we likely avoided a major downturn, at least in the immediate future, it is important to realize that we may have entered the next phase of the business cycle after the many strong years experienced in equity markets.

I would be remiss if I didn't remind our clients that 2020 is unlikely to be a repeat of 2019. While we remain optimistic about the opportunities we have to invest, we expect returns more in line with long-term assumptions.

It's obviously too early to tell how the 2020s will go, but with a number of headlines already in circulation, the 2020s are sure to be just as interesting as previous decades. As an optimist, I'm encouraged by humanities ability to solve problems and invent new solutions. There are more people in the world today than 10 years ago (that are generally healthier and better off)—that's good progress and good for overall global demand. Lot's more can be done, but from an investment perspective it is positive.

As always, MD will continue to diligently process global economic conditions and trends to make adjustments to your investments when necessary. It is our goal to provide portfolios designed to achieve your goals regardless of current conditions. If you ever have any questions about current events or your portfolio, please do not hesitate to contact your MD Advisor*